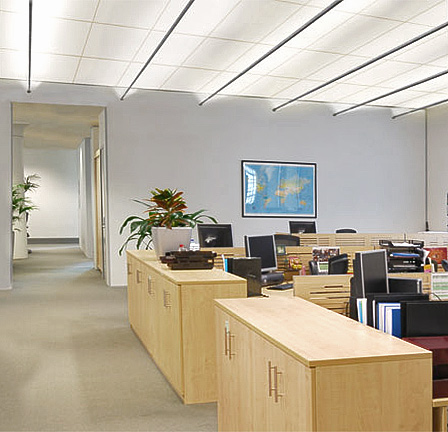 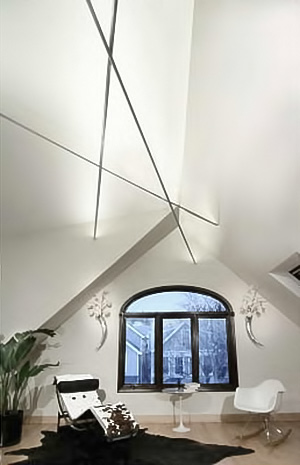 Last week I made a quick day trip to Las Vegas to see the lights. Not casino lights, but rather Lightfair 2012. It’s the world’s largest annual architectural and commercial lighting trade show and conference with over 500 exhibitors spread over 200,000 square feet and with over 20,000 attendees.

For designers like me who specialize in lighting, it’s like being a kid in a candy store with your parent’s credit card. Most exhibitors show products ranging from light sources to complete fixtures while others deal with testing, lighting control and measurement. But the highlight for me is the handful of companies which show some really innovative designs.

This year the most interesting product I found was from Edge Lighting in Chicago. Shown above is the Soft Line Indirect LED Lighting System that incorporates a thin aluminum channel (similar to a contractor’s tape measure) suspended by two turnbuckles that mount on opposite walls. As you can see from the pictures, they can be mounted perpendicular to the wall or at various angles up to 40’ in length. The white (or optional color changing) light comes from dimmable LED strips.

To me, this is where LEDs really shine. You couldn’t make this type of fixture with any other light source. Low power consumption and the light weight of LEDs make this suspended metal strip a true focal point in any space. In fact, the majority of exhibits focused on LEDs this year. There were a few ‘new’ vintage incandescent bulbs you see in restaurants and bars everywhere now and a few odd magnetic induction lamps but the vast majority was of the show was LEDs.

I think we’ve finally reached the tipping point where the cost and brightness of LEDs has matured to make them viable lighting options. And over the next few years, they’ll be standard replacements for incandescents and CFLs. Strip fluorescents still have a lot of life left in them and will probably dominate most commercial applications for the short term.

Despite the 45 minute airport taxi line wait and the 5 hours of walking, I came away inspired and amazed at the technological progress in the field of lighting. And since lighting consumes almost 35% of our electricity in the US, it’s a great target for innovation.